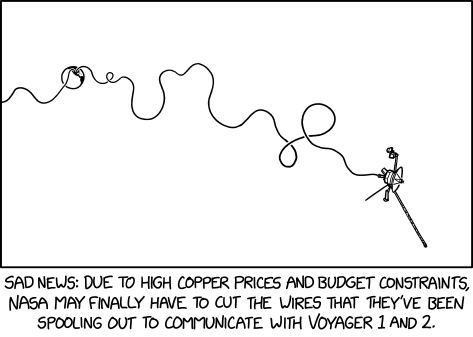 Fidtz
reply
I think that is about 4 trillon dollars and about 100 billion metric tonnes of #24 wire.

ManBehindThePlan
reply
Should have used fiber! 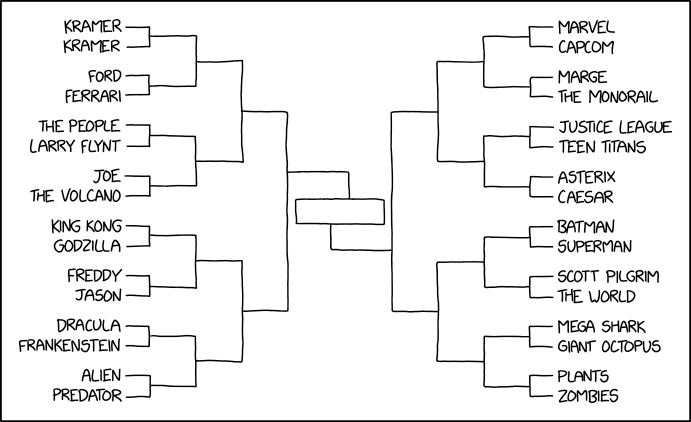 Fidtz
reply
"The Volcano" vs "The World" or "The Justice League" or "Marvel", depending on your view of various super powers.

alt_text_bot
reply
Some works didn't make the cut; in "Ecks vs. Sever" vs. the passage of time, the latter seems to have won pretty decisively.

reconbot
Superman would realistically beat batman. I ended up with Predator vs Volcano vs Marvel vs Superman 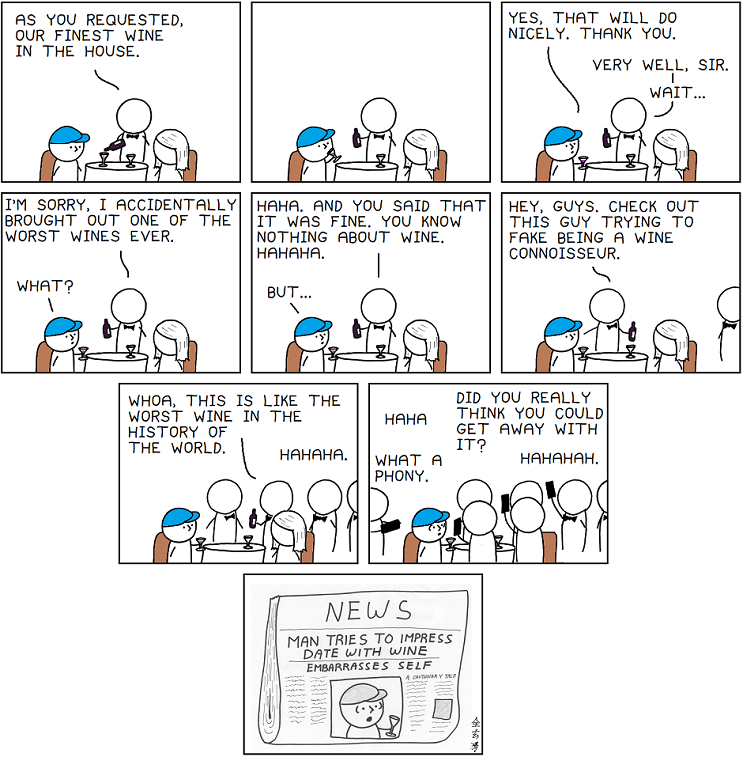 Fidtz
reply
All better than Merlot for a Wedding! Valpolicella or Beaujolais could be inexpensive red options too.

Covarr
reply
I don't care what the experts say. The experts would have me serve Merlot at my wedding reception, and that is simply not happening.
East Helena, MT

Fidtz
Good lord, what experts say that? That is the worst choice for a random group of people.

Covarr
Well, that's what the people at the winery I visited suggested. I'm probably gonna go with a Riesling for white (my personal favorite), and maybe a Malbec or Pinot Noir for red. Even if I did think Merlot was a good choice in general, it doesn't fit our menu. 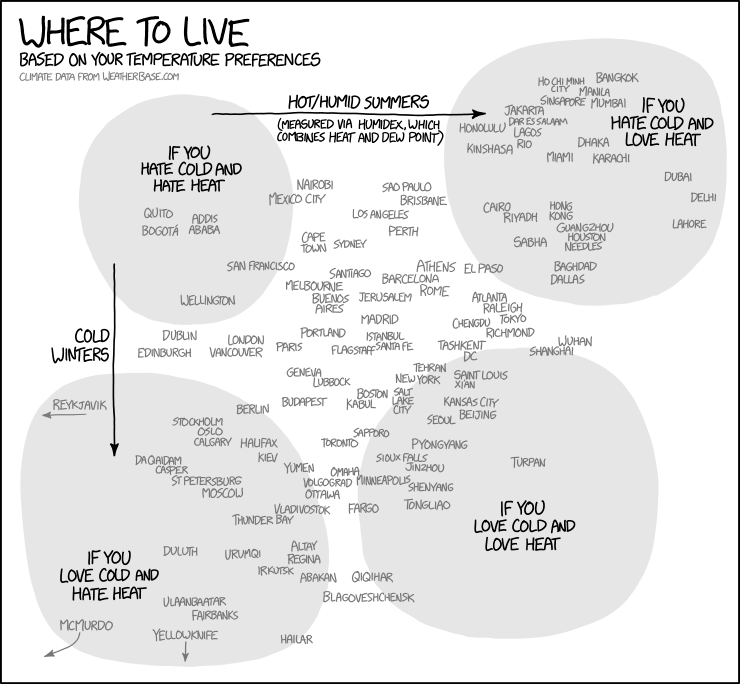 Fidtz
reply
First xkcd for a while I don't think works. I have been to Riyadh and Hong Kong in the summer. I find it hard to believe anyone who loves one of their climates would even like the other. Dubai+Delhi seems dubious too though I have no first hand experience there.

mooglemoogle
Yeah that’s the thing, heat and humidity don’t necessarily go together. I could definitely see liking hot, dry summers but hating hot, humid ones. I would understand the other way less but that’s just me :)

kazriko
I'm tolerant of hot, dry, but I don't like it. Hot and humid, or even warm and humid just makes me miserable.

claudinec
reply
So true. Wellington, Edinburgh and San Francisco are at the top of my revisit/migrate list for the weather as well as the culture.
Melbourne, Australia

ameel
reply
Awesome. And I love that both Lahore and Karachi are in there!
Melbourne, Australia

I was wondering if KC would make it and sure enough, it is where it belongs: if you love cold and love heat. I live here and love neither.
Overland Park, KS

infogulch
Yup. I also hate both, but I hate heat more. Looks like I need to move in the direction of New York (on the chart, obviously).

This Is Real by noreply@blogger.com (Melissa McEwan)
Wednesday February 8th, 2017 at 7:30 PM

I felt like I needed to stipulate right in the headline that this is not "fake news," because, well, it may be difficult to believe that this is where we are.

In a press release, which you can read in its entirety at Massie's House website, Massie says: "Neither Congress nor the President, through his appointees, has the constitutional authority to dictate how and what our children must learn."

And: "Unelected bureaucrats in Washington, D.C. should not be in charge of our children's intellectual and moral development."

And: "It is time that we get the feds out of the classroom, and terminate the Department of Education."

You might imagine that Massie's legislation is some sort of critical commentary on the selection of DeVos, but that would be wrong. Because DeVos almost certainly shares his opinion about the department she was just confirmed to run.

After all, as I have been observing since the day Trump selected her, DeVos' only qualification is her willingness to destroy the Department of Education.

She was chosen specifically to be the perfect partner for Trump, who has said he wants to break up the "government-run education monopoly," and for Pence, who has been destroying public education in Indiana for quite some time, and for Bannon, whose exploitation of ignorance is significantly aided by subverting public education.

The GOP has spent decades shouting at poor and/or marginalized people to pull themselves up by their bootstraps, and now they want to take away their best opportunity to access a pair of boots.
Read the whole story

superiphi
reply
There's a serious difficulty trying to make a country work without national standards. Especially education, which relies on the assumption that people can move from one state to another....
Idle, Bradford, United Kingdom

kazriko
National standards can be agreed upon between the states without having a free-standing bureaucracy to trump the local initiatives. The Common Core initiative actually began as a state-run cooperative (And was actually popular... Until the DoE tried to force it.) We had minimal federal oversight of education as part of one of the other bureaucracies for decades before the Department of Education was formed in the late 70's.

beowuff
Don't worry. It'll still run irc as it's back end, so you can still connect.

Covarr
reply
What if I'm only still on IRC because the rest of my groups are?
East Helena, MT

alt_text_bot
reply
2078: He announces that he's finally making the jump from screen+irssi to tmux+weechat.
Next Page of Stories